What are integrity pacts?

Integrity Pacts represents an agreement between the public authority as a contracting party and the bidders. The parties involved undertake full behavior and commit themselves not to offer or to demand bribery, to reach secret agreements to influence the award of contracts and not to encourage acts of corruption either prior to the conclusion of the contract or during the execution of the contract.

Pacts also established a form of transparency of public procurement by facilitating access of third parties to this process as a monitor. The monitor is usually a civil society organization and monitoring may be conducted from the beginning of the procurement process until the implementation of the contract is completed.

Once signed, the Pacts is not just about the declared commitment to discourage any corruption. They also provide for a number of measures that increase transparency, thus effectively hindering the deviation from the established rules. This allows better monitoring of the process of awarding contracts, but also of their execution, through civil society. In this respect, the civilian monitor plays an essential role, closely following all the stages of the contract award and implementation process and indicating possible irregularities.

The Pacts tool was developed by Transparency International in the 90s to support governments, business and civil society in efforts to prevent corruption in public procurement.

The clarification rules of the ‘’games’’ for those involved and the reduction of costs associated with coruption in public acquisitions, both in the financial plan and at the level of public impact.

The buildind of public trust in state authorities, in public procurement processes through transparency of processes and submission of controlling the civil monitor.

The encouragement of a favorable investment climate, because the pacts represent a warrent that none of the competitors will not benefit of unjust avantages, derived from bride or other favours.

Be careful because the application of the Integrity Pacts does not guarantee total elimination of corruption from public procurement processes, therefore complementary measures are necessary in that sense.

At the same time, it is essential that this instrument is being implemented correctly, otherwise

The Pacts of Integrity can have pimp up flawed processes. This is still a risk that appears in the majorities of the measures that prevent corruption and it must not discourage the application of respective instruments, on the contrary, it must determinate an application as rigorous and as honest of the measures of fighting against corruption.

The benefits that Integrity Pacts bring to the signatories

Integrity pacts contribute to reducing the risk of corruption, by committing to an integrated conduct by public institutions and the business environment, but also by informally involving civil society with expertise in the monitoring of public procurement.

Among the benefits that such an instrument brings to signatories, both public institutions and companies, are: increasing public confidence in signatory entities; Developing quality projects at competitive costs; Improving the procurement process.

Integrity pacts are flexible and easily adaptable tools, can be implemented within contracting authorities that allow for the implementation of the desired standards without additional legal reforms.

The use of this type of pact enhances the credibility and legitimacy of the contracting authority. Anyone who is ready to expose their public procurement procedure to an independent monitor’s control, and through it to the public, has nothing to hide.

Integrity Pacts allow authorities to reduce costs and prevent corruption from public contracts. Bidders commit themselves to not agree on secret agreements, thus being motivated to prepare competitive tenders and therefore the public contract will be implemented in the best possible way.

The public procurement process is improving

Integrity pact can identify systemic issues within a contracting authority, and their correction can bring considerable improvements to future procurement processes. The Pacts can also encourage some institutional changes such as the use of e-procurement systems in particular.

By implementing the Integrity Pacts, contracting authorities can demonstrate that they are innovative and provide a good example to follow. From this perspective, this tool supports public officials who are determined to fight corruption and who want to protect their work in their projects. At the same time, through the Pacts, civil society, as a monitor, contributes to ensuring the integrity of public procurement processes.

There are several key elements that must be followed to ensure the effectiveness of Integrity Pacts:

The political will of the public contracting authority to implement the Integrity Pact at extensively implicitly political will to reduce corruption and promote integrity in public procurement.

Transparency each milestones in the contract acquisition

Independent monitoring of the implementation of the Pact. 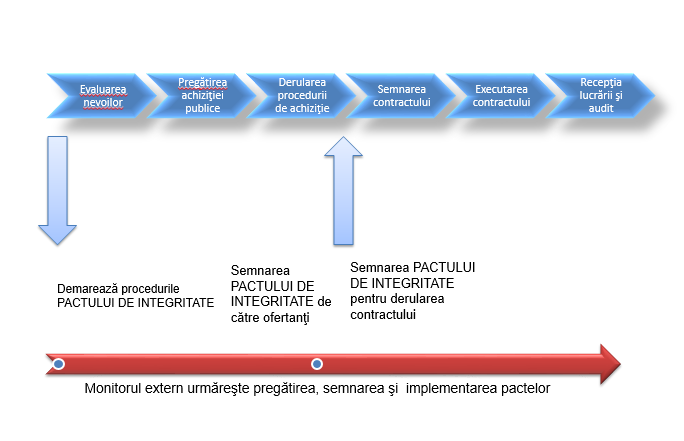